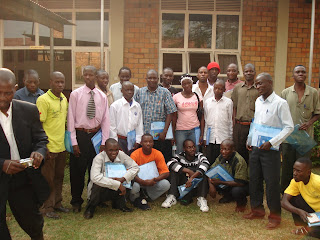 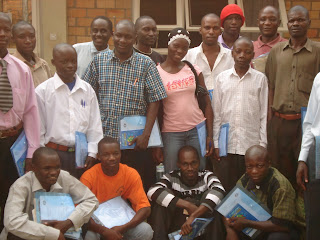 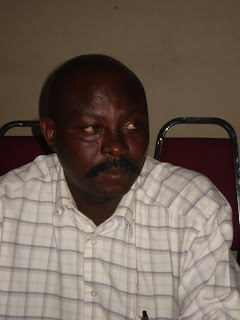 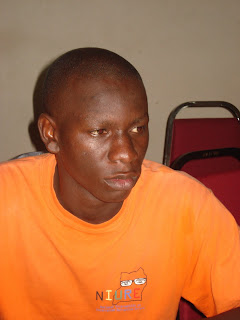 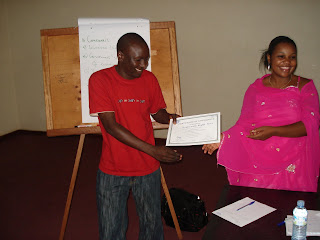 Posted by Esther Nakkazi at 3:07 PM No comments: 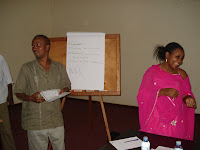 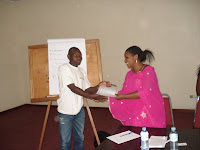 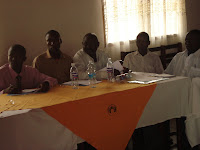 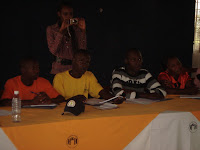 Posted by Esther Nakkazi at 2:48 PM No comments:

Email ThisBlogThis!Share to TwitterShare to FacebookShare to Pinterest
Labels: Participants in Hoima Workshop on environmental reporting 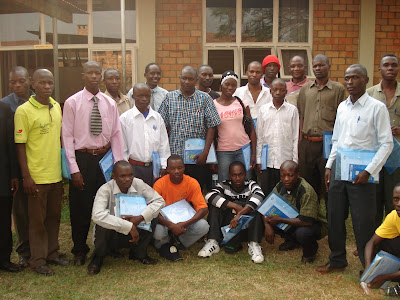 Posted by Esther Nakkazi at 2:42 PM No comments:

The conference was opened by Mr. Dembe Kawagga Ssetumba the secretary for production and marketing Hoima Town Council on behalf of the mayor. He said the major environment challenges in Hoima include Streams drying up and water sources like Lake Albert having low water levels.

This is the only station where the environment officer Jocelyn Nyangoma refused to come and speak to journalists because ‘we may be discussing issues against government.”

She asked that the district Chief Administrative Officer (CAO) first give her permission to come and talk to the journalists. Even if the CAO did allow she did not show up.

So the participants got into two groups and came up with the major environment challenges in Hoima as well as the effects to these problems.

This group although with many students was quite argumentative and there were 3-5 participants that were lively and knowledgeable. One student asked me ‘Madam how do you define climate change for exams” In other wards what would he write in an exam if the asked him what is Climate change?

“The Ozone layer s being depleted. When I walk I use my cap because the sun rays hit my head and am becoming more stupid,” Jeff on the effect of climate change.

This group had general fears probably a reflection from the bigger community but they thought that when the oil starts flowing from Kaiso-Tonya the environment is going to be affected and they would suffer.

These are genuine concerns but I could only encourage them to do the right thing- file your stories and we see what impact they will make especially on preservation of the environment.

As usual I probed about adaptation on Climate change and these are the answers I received:

-Traditional activities have been changed for most of the tribes. The pastoralists are slowly becoming cultivators too because of food insecurity.

-Many farmers are growing tobacco and ignoring other food, they assume that the money they get from tobacco will be used to buy food but the food prices are higher and cannot make up for the food not grown.

-Grasshoppers are abandoning some habitats like Masaka and they now fall in Hoima in two seasons may-June, November- December.  Actually the grasshoppers a delicacy for most of the people in Buganda region have abandoned their traditional areas in Masaka and Mubende. Now in one year we have two seasons for the harvest and they are in big. The Ngobi Hill used to have them but not anymore. I think its because of technology we have the powerful lights that attract them to Hoima. All grasshopper harvesters have shifted from Masaka to Bunyoro region.

-Mangoes are no longer growing very well. They are drying up. When it rains heavily they do not produce fruit because they have many leaves.

-Cattle keepers the Bahima have started staying in one place and have started growing cassava. The pastoralists are giving up their activity and producing their food to become both pastrolism and cultivators.

Most of the officials in Hoima do not go on record. Most of them want you to first go to the CAO and get permission from him.

The case study : Molasses distillation in Bulisa and its cause on the environment.

I left Hoima by Taxi on Saturday 25th July.

Posted by Esther Nakkazi at 12:28 PM No comments: 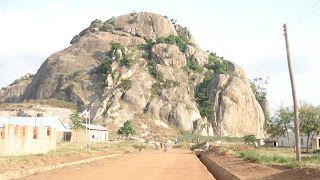 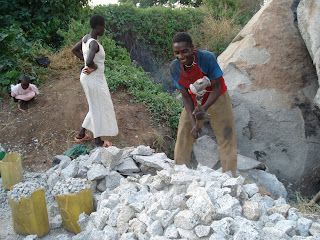 Among them, engraved in quarrying is Grace Margaret Asamo 51 years old, who entirely depends on rock quarrying proceeds as her sole income for the last six years.
Asamo was uprooted from her ancestral home in Katakwi following persistent raids by the marauding Karimojong warriors way back 1987.

Apparently, NEMA asked the group to form an association then it forwards its application to them seeking permission to continue with the quarrying. However, on the contrary, the Senior Inspector/Register NEMA, Hebert Oule when contacted on phone on June 25, 2009 said that NEMA has never given nor seen such application from Soroti quarrying association seeking for permission to carry the quarrying activity at the rock.

“I am sure those people were misinformed by some persons in Soroti and we as NEMA do not subscribe to their decision. The Soroti Municipal authorities have until next month to have quarrying stopped,” Oule added.
Posted by Esther Nakkazi at 3:19 PM No comments: 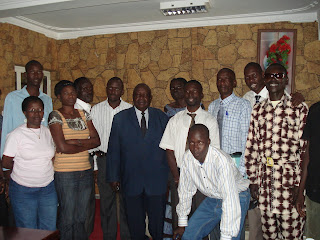 Posted by Esther Nakkazi at 3:10 PM No comments:

Email ThisBlogThis!Share to TwitterShare to FacebookShare to Pinterest
Labels: Teso region journalists with the RDC Ben Etonu after the closing ceremony 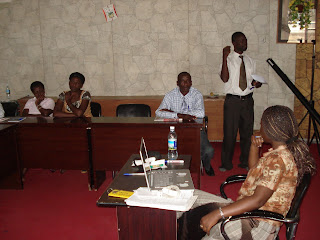 Posted by Esther Nakkazi at 1:47 PM No comments:

Email ThisBlogThis!Share to TwitterShare to FacebookShare to Pinterest
Labels: The trainer Esther Nakkazi listening to one of the participants

Pictures of the training 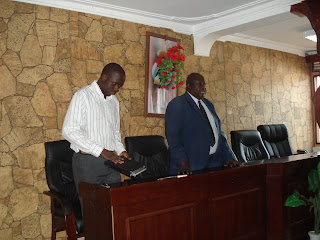 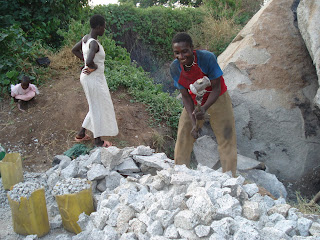 Posted by Esther Nakkazi at 1:29 PM No comments:

Email ThisBlogThis!Share to TwitterShare to FacebookShare to Pinterest
Labels: Yusuf from KAF and the RDC Soroti Ben Etonu ( above) 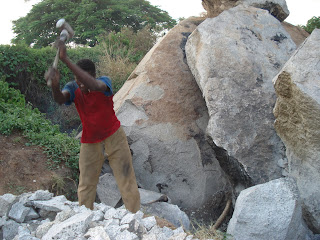 Posted by Esther Nakkazi at 1:19 PM No comments:

Email ThisBlogThis!Share to TwitterShare to FacebookShare to Pinterest
Labels: A man cracking stones at Opiyai

Tororo Rock will soon be no more (Pictures) 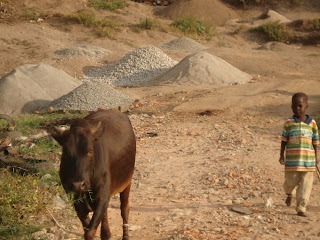 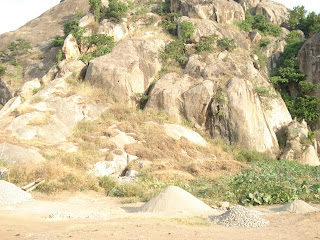 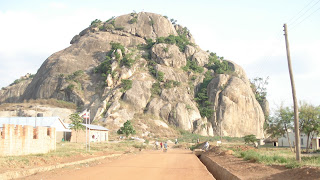 Posted by Esther Nakkazi at 1:05 PM No comments:

Email ThisBlogThis!Share to TwitterShare to FacebookShare to Pinterest
Labels: Opiyai rock in Soroti will soon be no more 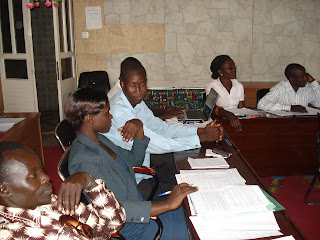 In the afternoon I took a stroll to see the great rock that the trainees were talking about and what was going to be our case study. I was warned against revealing my true identity, because the community, which was not oblivious to what they were doing as being wrong, was very hostile to journalists.
They were only friendly to local journalists and Osojo and many others were willing to go with me but I decided to go alone.  Camera on shoulder I took deliberate short steps when I was getting near the gigantic rock. I started taking pictures.
The first family that was breaking stones and heaping them up noticed and they sent a small boy probably to inform the head that there was an intruder. I casually took more pictures until I approached a young man and started chatting him up.
My case was like I work with an NGO that cares for the safety of workers. We were therefore concerned that they were doing this kind of work with no safety gadgets. He fell for it and told his wife about me. They showed me and I felt their palms which had almost lost feeling- the skin was so rough. The feet were cracked and had sores they needed gumboots I suggested.
Whole families including children and grand parents spent days here at the quarry cracking stones to be used in the construction industry. A basin cost as little as 1,500- 75 cents. A lorry came around and they loaded stones with spades, dust was everywhere polluting the air. The noise from the hammers cracking stones was a song; everyone was silent except for the men loading stones who were shouting at each other.
While we chatted a tall woman came over and spoke to me in Ateso I could not reply. She greeted me in English and I explained myself. The guy I was talking to also intervened and explained my mission.
She was happy that this (NGO-started by me) was concerned about safety at their work place. But went away with not much interrogation to me. I suspect she was still suspicious about me. I took some pictures and thanked the guy and strolled back to the hotel.
My analysis was that unless government found another alternative for the local people the giant opiyai rock would go and very soon. It would definitely destabilize the environment how I don’t know, the scientists can tell us.
Three weeks after I left Soroti deaths due to hunger were reported in the press. Although I could not monitor the local stations I imagined the journalists who were in the training reported these stories and gave a better explanation to the listeners.
Most of the journalists who attended (25) were from these districts were people were dying of hunger- Bukedea, Soroti, Katakwi, Amuria and karamoja. (It would be interesting to measure impact after training but the project does not allow for that).
Food security was a problem but climate change had to be also be explained and put into context so that farmers could come up with adoption ways to guard against hunger and death.
Action was taken. The president Yoweri Museveni went to Teso region to assess the situation. Relief food was delivered. Different leaders including the queen of Buganda – the Nabagereka, appealed to the government to extend relief food to the feminine victims. Members of parliament warned that climate change has had and is going to have a negative impact on food security.
But the problem is nobody seems to talk about sustainability. What I see is that rice, which is being promoted by the Vice president’s office as a poverty eradication scheme could, actually cause a lot of food insecurity as most homes abandon traditional food crops for rice.
Wetlands and swamps are also being destroyed in the name of growing this cash crop-rice. But households sell everything with nothing for them to feed on. The RDC Rukungiri mentioned it. A study case is Sierra Leone. More needs to be done.
Posted by Esther Nakkazi at 12:55 PM No comments: