After Evelyn and her boyfriend had dated for four years they decided to get married. They were young and so in love. The only medical check-up they bothered to take was HIV as was advised by friends and family.

Soon she was pregnant with a baby boy and another one came a year later. Evelyn’s hope was to have two and maybe another set of children later after securing a place in her career as a lawyer.

Henry the second child was sickly and not as strong as his big brother. They blamed it on the diet, the maid, low appetite, everything, whatever. The frequent visits to the hospitals and long nights of the child crying with unexplained pain sent the young parents panicking.

After many misdiagnoses by various physicians, one of them casually suggested a sickle cell disease test. The confirmatory test turned the young family into misery and eventually the husband left to remarry someone ‘normal’ which still leaves tears in Evelyn’s eyes.

Something else still hurts so bad. While seeking treatment for her little boy she was shocked when a doctor said to her “for those who succumb…it is nature’s way of cleansing the human race.” It meant her child would die anyway and it's then that she got determined to fight for him.

About 12,000 to 16,000 children below five years die of sickle cell disease annually in Uganda. Sickle cell disease has been declared a major public health problem for sub-Saharan Africa by the World Health Organization. However, its funding remains very low.

According to Evelyn, ignorance among health professionals and the public is the biggest challenge. “The few doctors who treat sickle cell in children are just passionate about it.”

So while cardiologists are heart specialists and oncologists in cancer, sickle cell disease has no specialty.

Besides the few medical professionals, the statistics too tell a story of laxity.

At least 15,000 to 20,000 babies are born with sickle cell disease every year in Uganda and 80 percent of them die before their 5th birthday. As a single disease, it could be killing more under-fives than any other although the comparable statistics are scanty.

These figures are from 2014, the Ministry of Health survey carried out to establish the prevalence of sickle cell trait and sickle cell disease across Uganda.

Charles Kiyaga the national sickle cell coordinator at the ministry of health says the survey documented a high sickle cell burden with a national trait average of 13.3 percent and a disease burden of 0.73 percent.

But the distribution is not uniform across the country with some high burden districts; Gulu, Lira, Kitgum, Dokolo, Oyam, Tororo, Jinja, and Kampala have a prevalence of 20 percent and disease burden above 1.5 percent.

With these alarming figures, the ministry of health started newborn screening in the high burden districts covering a total of 274 health facilities and also equipping them with prophylactic drugs like penicillin, antimalarials, folic acid and training health workers in sickle cell management.

So far over 50,000 newborn babies have been tested.

One high burden district though remains an enigma. Bundibugyo situated at the border of Uganda and the Democratic Republic of Congo. It is one of the highest-burden districts with a prevalence of 21.7 percent of trait and 1.9 percent of disease and these figures have been constantly high since 1949.

A 1949 study put the prevalence of trait among people in Bundibugyo at 45 percent. Why its still a mystery is that except for its neighbor Ntoroko district with a trait prevalence of 15 percent all districts around Bundibugyo have a prevalence trait of less than 10 percent.

Scientists believe there is a need to investigate further the factors that predispose the Bamba tribe who predominantly live in Bundibugyo to more sickle cell disease as opposed to the districts around it. Of course intermarriages among carriers without knowledge promotes increased spread amongst communities.

Data from the 2014 survey has been useful as Uganda is now the only African country with current national prevalence data, which has also been published in a leading medical journal, the Lancet.

The research earned Uganda a reward. It was nominated to host the 6th International Symposium on Sickle Cell Disease (REDAC 2016) which happened last month and raised the profile of the disease among Ugandans.

Mass screening, patient management, early testing, counseling, and sensitization campaigns have been created. Pre-marital counseling and testing are being promoted in collaboration with religious leaders.

“We want it to become policy for every couple to test for sickle cell disease before they get married,” says Evelyn.

Dr. Jane Ruth Aceng the Minister of Health says there are plans to scale up newborn screening services in high burden districts and introduce hydroxyurea, which is a disease transforming drug.

She says the Ministry of Health also plans to implement a policy to administer the pneumococcal vaccine to children with sickle cell disease above 2 years to protect them from recurrent infections.

In an effort to increase advocacy and support groups, Evelyn says they have a Whatsapp group and self-help messages.

“We send each other messages if there is a child who is sick or one of our members. We also teach the families to have home remedies,” she says. These could be as simple as using hot water bottles for pain, drinking at least 3-4 liters of water per day, eating nutritious foods.

“If a child eats one egg, a sickle cell child will eat two eats every day. They’ve got to have enough proteins.” In her opinion and considering the pain she concludes, “it is easier to give birth to a child with HIV than one with sickle cell disease.”


NB: Lynn Najjemba a journalist by training has a dear son very ill, a sickle cell sickler who needs to have a bone marrow transplant. For any contributions you can make towards this cause please contact Najjemba directly on  +256704 026 888/ lynn.najjemba@panosea.org or follow the tweet #savekacie
Posted by Esther Nakkazi at 12:57 PM No comments:

What turns the mighty elephant away? Chilli, Condom, Firecracker

A low cost and ingenious innovation made of chilli, a firecracker and a condom can drive a huge elephant away and protect communities' food.

A ‘chili cloud’ made of chili powder mixed with sand and a lit firecracker inside of a condom can be thrown near a grazimg elephant to make it uncomfortable enough to turn around. 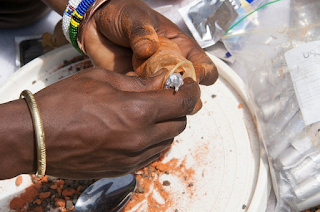 This four-step elephant alarm system does not harm the elephant. It just makes the elephant uncomfortable enough to turn around.

Honeyguide Foundation with support from The Nature Conservancy is working with local communities in northern Tanzania to use fireworks, chili powder, and flashlights to safely redirect elephants off farmland.

“The elephant alarm system is an ingenious and inexpensive way to reduce conflicts by safely redirecting the animals off farmland,” said Matthew Brown Africa Region Conservation Director, The Nature Conservancy in a press release.

Before this innovation villagers used to throw a spear at those stubborn elephants and they would go off and die somewhere else but now they use a torch and a chili cloud to chase away them.

Human-wildlife conflict has become a growing challenge as more people turn to farming in corridors where elephants range, conflicts between the two cause huge problems.

When an elephant wanders onto a villager’s farm, it can have a devastating effect: A single elephant can destroy someone’s food supply for the entire year in one night, trample property, and threaten a family’s safety.

“The fact that people on the ground are participating, and we’re saving elephants while protecting livelihoods is amazing. Honeyguide wants to make sure that farmers and communities continue to be conservationists, and in order to achieve this, elephants need to be seen as a friend rather than foe,” said Damian Bell, Executive Director, Honeyguide.

The elephant alarm system does more than protect one wandering elephant and one family’s crops each night: It’s part of a holistic strategy to protect landscapes, natural resources, and wildlife for the long term. Ensuring that local communities benefit from wildlife, and are engaged in their conservation, is a key element to save them.

“Elephants are enormous animals to try and keep out of your vegetable patch and also extremely dangerous animals,” said Bell.


“Since we have developed the human elephant conflict toolkit, we have seen an attitude change with in these communities whereby they are much more confident that they can keep elephants out of their fields without harming the elephants.”

ends-
Posted by Esther Nakkazi at 11:22 PM No comments:

Often times, leaders and the international community attend global conferences and make commitments towards causes they never honour because there is no mechanisms to make them accountable.

Now Samasha Medical Foundation, a Uganda non profit dedicated to advocating for improved health, has developed an innovation that can monitor if commitments are honoured and translated into implementable activities.


The Motion Tracker is an online monitoring tool that can track mechanisms made towards achievement of commitments made by governments and their leaders.

It is an evidence based tool based on the WHO health systems Framework monitoring service delivery, health workforce, information, medicines, financing and governance.

“This was a proof of concept project translating reproductive health global commitments into action at a country level,” said Moses Muwonge the director Samasha.

“It is an evidence based tool that has been very good for us to know how our resources are expended and has helped us to coordinate with all the stakeholders working on reproductive health issues,” said Dinah Nakiganda, the assistant commissioner reproductive health at the Ministry of Health.

The Government of Uganda made reproductive health related commitments at various global fora; in 2011 at Every Woman Every Child (EWEC), 2012 at the London Family Planning Conference –FP 2020 and in 2013 at the UN Commission on Life Saving Commodities (UNCoLSC).

Samasha working with Reproductive Health Supplies Coalition (RHSC) developed a Commitments Compendium, which has a compilation of explicit and implicit statements from the Commitments made by Uganda, which were deconstructed into implementable activities that can be monitored, said Dr. Muwonge.

In the project methodology, selected individuals from organisations that contribute to reproductive health related commitments were selected basing on a stakeholder mapping matrix.

The methodology and tools have now been adapted by Burkina Faso and Zambia, said Muwonge.

Cornelia Asiimwe the program officer at Samasha says partner reporting on contribution to commitments increased from 23 in September 2015 when the project was launched to 64 in April 2016.

“The percentage of returning users has also grown. At first they were spending just about a minute now they take 3 minutes and more, which shows that they like the tool,” said Asiimwe.

After about a year now, the Motion Tracker has shown that the different commitments are either on track or have been or not achieved in regards to reproductive health commitments in the areas of finance, policy, service delivery, supply chain and technology said Asiimwe.

It also tracks the money and helps policy makers devote money to areas where it is needed most, said Nakiganda.

Espilidon Tumukurate an adviser for Jhpiego, said this is one of the success stories and now the innovation is an export. He however said that Samasha needs to get more funding and take the tool to the lower level- district- and also track how the money is helping deliver services.
Posted by Esther Nakkazi at 1:27 AM No comments: