Look beyond treatment-Uganda scientists on US antimalarial drug quality study

This week the US published a report from a study on the quality of anti-malarial drugs in Uganda and other African countries.

But Uganda scientists have different opinions saying although the study was good and relevant, there are more pressing problems with malaria, which kills at least 300 people, per day, mostly children under five years and pregnant women in Uganda.

Some Uganda scientists think the study was a 'commercial ploy’ by the malaria industry but all agree there is a bigger problem than impure drugs. They pointed out that the resistance problem for malaria drugs is more of a bad consumer behaviour problem rather than purity of drugs.

In Uganda, drug resistance is manifested because many people misuse drugs properly rather than taking low quality anti-malarials. Dr. Myers Lugemwa, officer in charge of malaria research at the ministry of Health said even if it sounds like common sense but the fastidious behavior of patients  probably caused by ignorance and cultural beliefs brings about drug resistance.

He said many patients seeking treatment have cheeky behaviors like ceasing to take medicines when they feel better and sharing medicines with neighbors and friends.

So for Uganda and many other countries the issue of quality of drugs is not a primary concern but accessibility.

“We are only taking what is available, we can not just have people die because the drugs are not good quality. We have tested them and found them effective,” said Dr. Lugemwa.

National Drug Authority (NDA), the Uganda regulatory body officials said they test all the drugs that come to the market and they are dealing with counterfeits on the market but the laboratories are registering a downward trend in quality testing failure over the past decade.

“There has been a drop in drug failure rate in our laboratories over the last 10 years. But there are problems with consumers due to self medication, incomplete doses and as a result drugs become ineffective,” said Fredrick Ssekyana, the spokesperson for Uganda National Drug Authority (NDA).

The reactions follow the release of a report that said that the most effective type of malaria-fighting drugs sold in three African countries including Uganda are often of poor quality, raising fears of increased drug resistance.

Between 16 per cent and 40 per cent of artemisinin-based drugs sold in Senegal, Madagascar and Uganda failed quality testing, for reasons including impurities or not containing enough active ingredient, the survey found.

'I am alarmed by these results because it means there are many cases of malaria that are being only partially treated, and that just guarantees acceleration of artemisinin drug resistance.'— Rachel Nugent, Centre for Global Development

The study was the first part of a 10-country examination of antimalarials in Africa by the U.S. and the World Health Organization.

Artemisinin-based drugs are the only affordable treatment for malaria left in the global medicine cabinet. Other drugs have already lost effectiveness due to resistance, which builds when not enough medicine is taken to kill all of the mosquito-transmitted parasites.

If artemisinin-based drugs stop working, there is no good replacement and experts worry many people could die.

"It is worrisome that almost all of the poor-quality data that was obtained was a result of inadequate amounts of active [ingredients] or the presence of impurities in the product," said Patrick Lukulay, director of a nongovernmental U.S. Pharmacopeia program funded by the U.S. government, which conducted the survey. "This is a disturbing trend that came to light."

NDA officials said they also have a problem with increasing drug counterfeits on the market, which is a global evil, but it is working with Interpol to curb the vice.

The three-country report also found bad drugs in both the public and private health sectors, meaning governments — some buying medicines with donor funds — are not doing enough to keep poor-quality pills out.

All of the drugs tested from the public sector in Uganda, however, passed the quality tests. But 40 per cent of the artemisinin-based drugs in Senegal failed.

"There are countries where donated medicines are not subjected to quality controls, they're just accepted," said Lukulay. "There are countries in Africa where Chinese products have been donated and found to be unacceptable later in the public sector."

Donations come in during epidemics or seasonal disease outbreaks, simultaneously and generously, and they are accepted by non-governmental and faith-based organizations unconditionally, according to NDA officials.

“We urge that the donations are subject to the same tests but we usually re-export or destroy them and the costs are borne by those who donate them,” said Victoria Birungi Kwesiga, inspector of drugs at NDA.

Nearly 200 samples underwent full quality control testing in a U.S. laboratory to examine the amount of active ingredient present and drug purity. For both drugs, 44 per cent from Senegal failed the full quality testing, followed by 30 per cent from Madagascar and 26 per cent from Uganda.

“I think this is a commercial ploy to discredit other drug companies super ceding others,” said a pharmacist in Wandegeya a suburb in Uganda.

“They should look beyond treatment to prevention. Recently I heard in the media that Uganda mosquitoes are resistant to DDT, they should focus on the parasite,” said Rhona Nankya a nurse in Kampala.

In all three countries, the antimalarial brands collected from various areas and sectors tended to either do well across the board or poorly, which could prove helpful for governments working to ban low-grade drugs.

Results from the other countries surveyed — Cameroon, Ethiopia, Ghana, Kenya, Malawi, Nigeria and Tanzania — have not yet been publicly released by the WHO.

Ends-
Posted by Esther Nakkazi at 2:36 PM No comments:

By Esther Nakkazi
On 2nd February we celebrated the Medical Research Council/ Uganda Virus Research Institute (MRC/UVRI) 20-year marriage anniversary on HIV research at Entebbe.
Medical research is not a sexy topic to cover by all means but it such an important topic especially when it translates into policy.

The search for government policy formulations from science research was not something I used to pay attention to, even as a science journalist, but as a freelancer you get privileges of tuning your pen and mind to whatever publication you are contributing to.

So in 06/07 while writing stories for a UK based editor, Robert Walgate, for a health magazine RealHeathNews the stories he was interested in were policies that accrue from research. There was one outstanding one, at the time, male circumcision as a result of the research done in Uganda, Kenya and South Africa. It is yet to become policy in Uganda.

Successfully the MRC/UVRI, a multi disciplinary, research unit on HIV has managed to lead to HIV policies, guidelines and treatment protocols in Uganda and beyond. For instance research conducted at the unit has produced such ground breaking results that is has helped change international guidelines for treating HIV.

A major trial conducted by the unit in the 1990’s showed that an antibiotic drug, cotrimoxazole (septrin) was able to cost effectively prevent many of the debilitating secondary infections that plague HIV patients because of the damage to their immune systems caused by the virus.

As a result, provision of these drugs for HIV has been introduced not only in Uganda, but also almost everywhere in Africa.
Dr. Paula Munduri manager HIV research programme at the Unit is currently planning a new study of cotrimoxazole in combination with ART to see if cotrimoxazole treatment is necessary once patients’ immune systems have sufficiently recovered.

If the results show that continued cotrimoxazole treatment is unnecessary then this could save money on giving people extra pills they do not need. But also importantly it will reduce on the number of pills that patients need to take when they are already on four to eight pills per day with ART, so this could improve patient compliance with treatment.

If funding is secured to go ahead, the trial will start in mid-2010. The funding has been secured, hopefully enough to carry more important research, as one of the speakers at the Entebbe celebrations announced. Mr. Martin Shearman, the British High Commissioner, announced 40 million pounds in support of the unit for the next ten years.

Some of the research underway as part of the unit’s basic science programme is to develop an HIV vaccine and exploring issues around the appearance of viral resistance to anti-retroviral drugs. The major focus is to pinpoint which host factors and which viral factors are actually responsible for providing protection against HIV.

One of the puzzles of HIV today is why a small group of individuals in this world have natural protection, that is even when exposed to the virus they do not seem to get the infection easily. It important to understand the special attributes of their immune systems, to design a vaccine, which could create such an immune response in other people.
Dr. Pietro Pala is leading this study a part the International Centre for HIV Vaccine Immunology (CHAVI) which is a large group of collaborating universities in the US and the UK linked up with samples from a very large cohort of sero-discordant couples in Kampala.

Samples have been collected since 2007; and enrollment of the patients in the study was recently completed.
MRC boasts of the most advanced basic research infrastructure, understanding the immune responses, people progression to HIV. It transcends all institutions because of the collaborations.

On 2nd Feb at the anniversary celebrations a regional reference laboratory at MRC/UVRI to monitor HIV drug resistance was commissioned by Dr. Gilbert Bukenya, the Vice president.
Hopefully we shall have more policies formulated from research at MRC/UVRI and I will have so much to write about the next time Walgate calls! 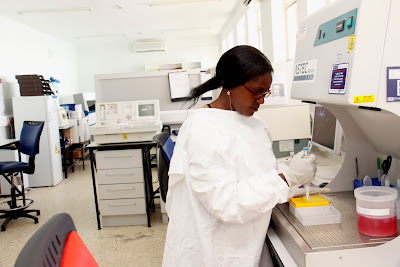 The lab commissioned at the MRC/UVRI 20th anniversary
Ends.
Posted by Esther Nakkazi at 6:27 PM No comments: