The Noisy Ride to Kumasi

By Esther Nakkazi
I landed in Accra at 11.40 am en route from Nairobi. It was hot. Very hot. Instead of travelling for 40 minutes in a small plane.  I opted for the 6-hour comfortable V.I.P bus ride to Kumasi, Ghana’s second-biggest town after its capital Accra.

The bus was red. A Daewoo type, decorated with a Ghanaian flag with a huge TV screen at the front. This chain of buses is owned by one Ghanaian international footballer, I was told, as if to explain the luxuriant comfort.
My seat number was two, on the aisle, directly behind the driver, which enabled me to watch the road way ahead of the journey.

I was headed for a two-day journalists and scientists meeting (15th -16th July) as one of the trainers at the Kwame Nkrumah University of Science and Technology (KNUST).

It was indeed a smooth and comfortable bus ride except about 20 minutes into the journey after clearing through the city traffic, the noise started and continued for the six hours up to Kumasi!

First, it was the preacher. Armed with a bible we started off with a prayer for journey mercies, not bad, not bad at all!

He then started real preaching, given that I do not understand any of the languages spoken in Ghana, I was only an observer, occasionally glancing behind at the other passengers.
Everyone was quiet as if we were in church. The loud preacher went on and on, occasionally ‘ the congregation would shout Amen or clap like real church time.

Then I recalled, on my first trip to Ghana in 2012, I had this big dream of writing a book titled ‘happiness’. Maybe sometime it will come to pass.
I was randomly asking Ghanaians- what was the happiest day of their life.  Most of my answers were 'finding Christ, turning to Jesus or the day they were born again'.

That was it. I was later to find out that it was not just in words but in practice too. I left my luggage with no attendant at the busy bus terminal building on the insistence of the bus driver and 20 minutes later, Voilà! The bag was there and intact. That does not happen in many African countries!

In the V.I.P bus, two hours into the journey the preacher alighted. In came the herbalist. First, he gave a brief of what he was selling, what it heals, that was about twenty ailments and then there was a testimony from a woman in the back seat of the bus.

I was told by my neighbor, a young girl, that the woman said she had used the herbs and they worked fine. So this girl bought six packets of whatever... When I inquired why so many, as if they were tablets recommended by a doctor and she had to complete a dose, she said the woman’s testimony was very convincing.

Then there was what seemed to be a commercial break, a bit of silence, then the conductor switched on the TV. Unfortunately, because of the proximity of my seat to the TV, the blaring noise was just in my ears as though I had tuned maximum volume with headphones on.

The loud adverts were played first. It was ‘a camp of only Jesus production’. Initially, I pretended to fall asleep but the loud movie noise could not let me. So I settled into watching it.
I got bored but there were no alternatives. Except for the men who were selling dead wild animals ( I presumed ) on the roadside and I thought of Ebola, which scared me to death.

Three hours into the journey we stopped and a young lady selling bread entered. Passengers were waving at her to sell to them loaves as if her basket was a supermarket. In minutes it was all gone. She looked very pleased with her day's sales and tipped the driver when it was time to alight and off she hopped off.
By the time we arrived in Kumasi, I heard listened to the preacher, herbs vendor, and the real loud movie and music from the radio- like disco time. What a  noisy ride! 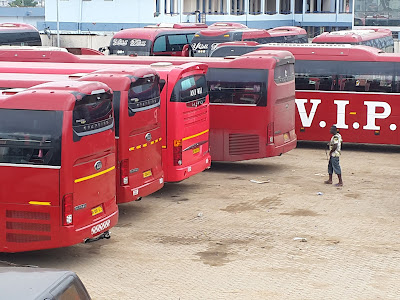 Posted by Esther Nakkazi at 4:46 PM